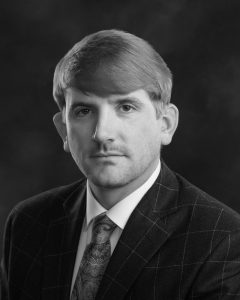 Mr. Rogers was born and raised in New Albany, Mississippi. He is the sixth generation of the Rogers family to reside in Union County.

In 2005, Mr. Rogers was accepted to participate in the Accelerator Summer Business Institute program taught by the Owen Graduate School of Management at Vanderbilt University. Mr. Rogers successfully completed this program then returned to law school in the fall of 2005. Mr. Rogers received his Juris Doctorate in 2007 and, thereafter, passed the Mississippi Bar Examination becoming licensed to practice law in the State of Mississippi in October, 2007.

Mr. Rogers currently serves as the attorney for the Union County Board of Supervisors.  He is also the Union County Youth Court Referee. He has, in the past, served as a municipal attorney. Mr. Rogers has been a member of local civic organizations and has served as a board member and/or past president of the same.  Mr. Rogers was rated Rising Star in the Mid-South by Super Lawyers® in 2016 and as one of the 10 Best Attorneys in Mississippi by the American Institute of Criminal Law Attorneys in 2017.